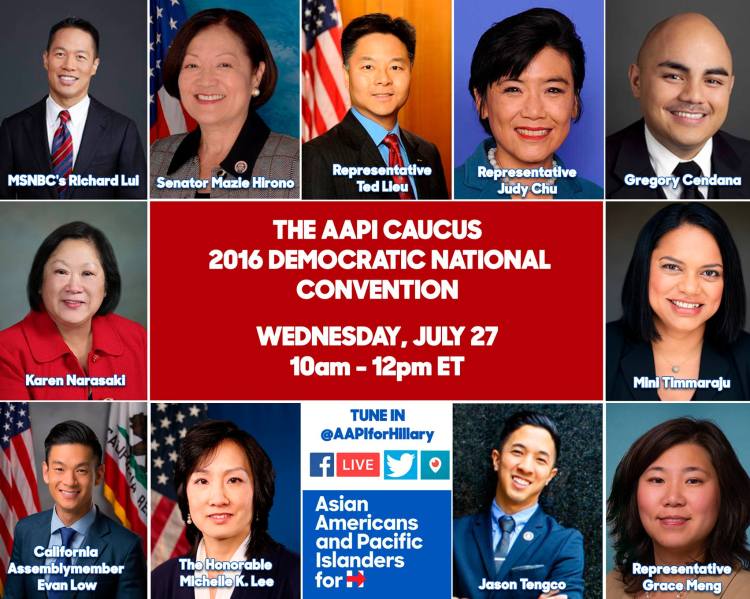 On the heels of the Republican National Committee nominating a divisive platform which denigrates minority communities, the specialty media team of the Democratic National Convention Committee (DNCC) announced that the convention will convene an official Asian American and Pacific Islander (AAPI) caucus meeting on Wednesday, July 27, 2016 at the Philadelphia Convention Center.

The caucus meeting will preview the bold vision and progressive blueprint of the Democratic Party that is lifting up the collective prospects of the AAPI community from coast to coast.

On Wednesday, members of the Congressional Asian Pacific American Caucus (CAPAC) will also address how Secretary Clinton and the Democratic Party are taking steps to invest in job growth, immigration prospects, educational opportunities and economic security for Asian Americans from the official main stage podium of the Democratic National Convention.

Expect Featured Surrogates at the Official AAPI Caucus Meeting Include:

10 a.m. AAPI Democratic leaders kick off the largest mobilization of AAPI voters in history at an official party caucus.

** NOTE: DNCC AAPI Media Center availability closes at 2 p.m. *
**NOTE: Media representatives interested in covering these events must be pre-credentialed. Multimedia materials from AAPI events at the convention will be made available at http://www.demconvention.com.**