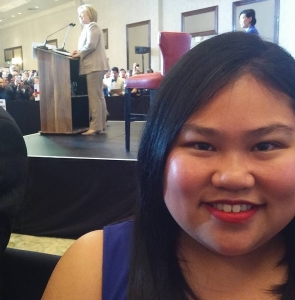 Filipino American Meriam Reynosa is a convention delegate from Dublin, California. She is a Senior District Representative in the California State Senate.

Why do you support Hillary for President in 2016?
I believe that our nation deserves a qualified and resilient candidate that exemplifies the legacy of our Democratic leadership and values- Hillary Clinton is that candidate. As an elected delegate, as a woman and young person, I am proud to pledge my support for Hillary Clinton as our next President. Hillary will continue to break barriers and keep our nation strong.

Which of Hillary’s platforms resonate with you most and why?
Women’s issues. Combating sexual assault and domestic violence, demanding equitable pay, access to paid family leave, protecting women’s rights, fighting for gender equality. These issues are not just women’s issues, these are global issues that must be defended and upheld in our communities. Hillary’s stances on these important points will ensure that women will ALWAYS have a voice and a seat at the decision making table on this platform that affects us all.

If Hillary is elected in 2016, what kind of lasting impact will her Presidency have on AAPI communities across the U.S.?
Immigration reform is one of the most important platforms that is important to me. As a daughter of Filipino Immigrants and a partner of an Irish Immigrant, I know the importance of having a strong, supportive and  pathway to immigration.  Our nation must find a way to resolve the visa backlog, reunite families and create  safe entry for immigrants to have the same rights and freedoms we have here in the US.

Why do you believe AAPIs support Hillary for President in 2016?
As the fastest growing minority group in the country, AAPIs will support Hillary for President in 2016 because she is the best candidate who will continue to shine a bright light on the disparities in immigration, veterans issues, education, employment and health issues. Already, Hillary has garnered the strong support of AAPIs nationwide, has reach out to our communities and ensured AAPI’s have been visible and active on her staff, she has highlighted our stories and has acknowledge the strong contributions of our AAPI communities across the nation.

This is part of a series of profiles of AAPI delegates to the 2016 Democratic National Convention compiled by Ivy Wei. If you’re a delegate, we’d love to profile you!