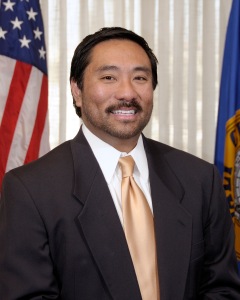 Filipino American Ray Buenaventura is a delegate from the San Francisco Bay Area.

Ray is a former Mayor & current Councilmember of Daly City, Calif. He also has a private law practice.

What should know about you?
I volunteered for Hillary in Iowa, Texas, Nevada, Pennsylvania, and California.

Why do you support Hillary for president in 2016?
I believe that she has the experience, the wisdom, the heart, and the guts to get things done.

Which of Hillary’s platforms resonate with you most and why?
Healthcare, Criminal Justice Reform, Immigration.

If Hillary is elected in 2016, what kind of lasting impact will her Presidency have on AAPI communities across the U.S.?
She will work toward immigration reform and will make sure the AAPI community has a seat at the table.

Why do you believe AAPIs support Hillary for President in 2016?
Because she has demonstrated a commitment to reaching out to the AAPI community and a proven record of knowing and understanding our issues.

This is part of a series of profiles of AAPI delegates to the 2016 Democratic National Convention compiled by Ivy Wei. If you’re a delegate, we’d love to profile you!