The text below is from an email this morning sent by PaKou Her, campaign director at 18MR.

This morning, my 6-year old daughter caught less than a minute of television news coverage about the wave of protests in the aftermath of Freddie Gray’s death while he was in the custody of Baltimore police officers.

This morning, my 6-year old daughter caught less than a minute of television news coverage about the wave of protests in the aftermath of Freddie Gray’s death while he was in the custody of Baltimore police officers.1 She turned to me and said, “Mommy, I think the police hurt a Black person.” I replied truthfully, saying, “Yes, I think they did.”

As the nation’s eyes turn toward Baltimore, it can be easy to feel hopeless, exhausted, and spent. As Asian Americans and Pacific Islanders, it can be tempting to turn away and tell ourselves that while this is horrible, we are not Black America.

But if there’s anything we’ve learned from Ferguson, it’s that Black America’s struggle against the long arm of police brutality is a struggle in which we’re all intertwined.2 As AAPIs, we can choose to be silently complicit with the status quo, or we can pick up the mantle of #Asians4BlackLives. 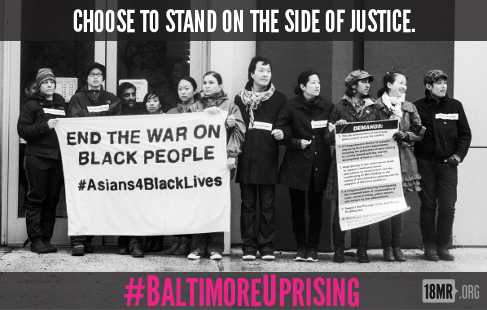 No matter where you live, you can support the organizers and activists who are trying to make a difference in Baltimore. Here are 3 things you can do right now to help:

1. Donate to the #BaltimoreUprising legal defense fund to ensure that every person arrested during the rebellion in Baltimore has access to proper legal representation, regardless of the charges.

2. Follow and share the real stories of what’s happening from people who are living and organizing in Baltimore. We suggest you start with these folks on Twitter. You can also Tweet and post status updates using the hashtags #BaltimoreUprising, #FreddieGray, #BlackLivesMatter, and #Asians4BlackLives.

3. Demand police accountability in the death of Freddie Gray. By adding your name to Color of Change’s petition, you can help increase the pressure on Maryland’s Governor Hogan to ensure he puts in place the necessary independent oversight required to bring Gray’s killer to justice and overhaul the Baltimore police department.

Sadly, as AAPIs, we face yet another moment that demands our solidarity, support, and allyship. I urge you to join me and others at 18MR to make the right choice today by supporting those in Baltimore fighting for their dignity, humanity, and lives.

Help me tell my daughter that while it’s true that the police are hurting – and killing – Black people, many of us are fighting to make it stop.